Bikeway Will Link Newington to the Metro Station
Votes

Bikeway Will Link Newington to the Metro Station

The wooded trail is being linked and extended for commuters and hikers. 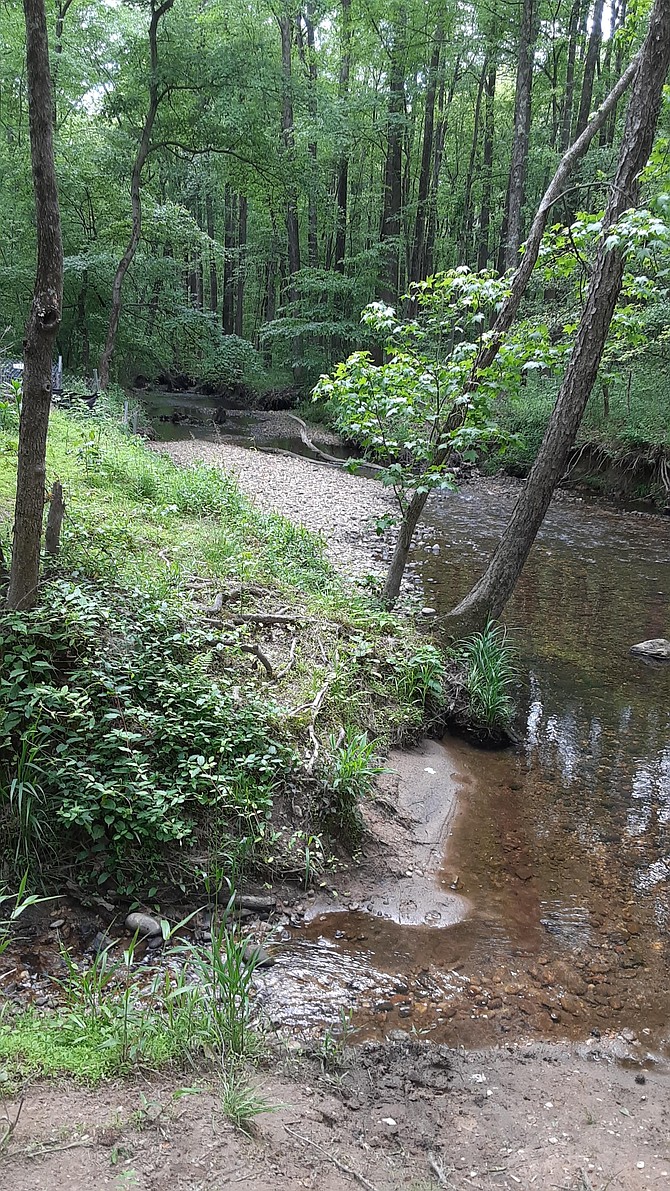 The trail will cross Long Branch. Photo by Mike Salmon.

In a lesser-known area of the southern Springfield-Beulah Road area, Fairfax County is building a multi-use path from Cinder Bed Road along Long Branch creek to the Franconia-Springfield Metro Station, enhancing a commuting option for many in this part of the county. The proposed trail, called the “Cinder Bed Bikeway,” will be a two-mile connection with two bridges over the creek, lighting, and neighborhood connections that are part of the county bicycle path network.

Serenity Cromer walks her pit bull named Becca on the wooded path nearly every day and has seen deer, foxes and other wildlife near the path. She hadn’t heard about the project, but liked the thought of it linking to the Metro station. “You are still in the city but it’s a nice retreat,” she said. 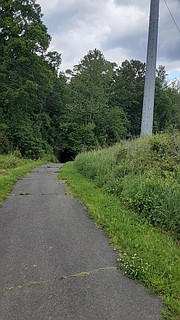 The path goes from the end of Cinder Bed Road into the woods off Beulah Road.

THE COUNTY describes the project as a continuous shared use path between Newington Road and the Franconia-Springfield Metro Station. A shared use path will be constructed along the west side of Cinder Bed Road, connect to an existing trail through Fairfax County Park Authority property, and then continue through private property to tie into the trail at the end of Barry Road that leads to the Franconia/Springfield Metro Station. The Cinder Bed Bikeway was discussed at a recent video public information meeting May 10 with county officials, the biking community and nearby residents.

"This is a commuter trail, bike trail," said Jeffrey Fasceski, the Fairfax County project manager who led the video conference. It is one part of a county effort to extend the trail from the Metro station to Fort Belvoir. "The entire trail will have lighting, the intent is to be a commuter path," Fasceski added. The trail crosses from the Mount Vernon District into Lee District and Supervisor Dan Storck (D-Mount Vernon) participated in the video conference. Storck is an advocate for bike route improvements in his district and was "very pleased to see this bikeway being done," he said.

THIS PATH is frequently used by area residents who walk, jog and bike, and some of the area children have even been fishing in the creek. “It’s a great trail, we walk this trail every day,” added Cromer. After the county laid out the plans for the project, there were a series of questions from residents, and the Friends of Accotink Creek were concerned that the trail edges too close to the creek in some parts.

The trail project is funded through county funds along with Federal Transportation Alternatives Program (TAP) Grant funds. Final plans are expected to be completed fall 2021, and construction is scheduled from November 2022 to May 2024.

Lighting is planned for this trail, and one of the slides showed one of the bridges with the planned lighting. The area is heavily wooded and down the hill from houses and roads and last year there was an incident on the existing trail. According to police, on May 14, 2020, a woman was jogging on a trail near the end of Thomas Grant Drive when a man began to assault her. A witness came to her aid and the man ran away. The woman was taken to the hospital and treated for serious injuries that were not life threatening. After a search of the area, officers identified and arrested 21-year-old Vincent Wesley nearby. Wesley was charged with malicious wounding and strangulation. He was taken to the Fairfax County Adult Detention Center and held without bond.

The Fairfax County Police Department does have Neighborhood Patrol Units that frequently patrol trails using mountain bikes said FCPD officer James Curry. “We would encourage those who do traverse these trails to make sure they notify a friend or family member prior to embarking on the trail, carry a fully charged cell phone, and be sure to start your hike or ride with enough daylight for your entire trip," Curry recommended.