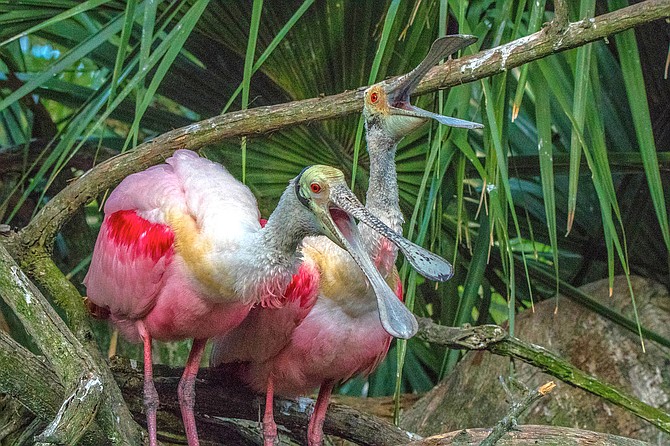 Nature photographer Barbara Saffir said: “I was thrilled to see the spoonbills and to photograph them [at Huntley Meadows] — even after seeing the more colorful breeding-color parents and babies up close this April in St. Augustine (Fla.).” Photo by Barbara Joan Saffir

Dixie Sommers, avid birder and treasurer of the Audubon Society of Northern Virginia, photographed the dozens of photographers wielding thousands of dollars in optics, lined up to see the spoonbills.

The pair of Roseate Spoonbills that have been visiting Huntley Meadows.

Their flat, six-to-seven-inch, spatula-like bills look like long-handled spoons swishing back and forth in the Huntley Meadows Park wetland. These are stunning birds, roseate spoonbills, and they have attracted legions to the park in recent weeks. Observers reported one on June 26 to eBird (https://ebird.org/home), three on July 16 and two each day since as of July 20, according to Dixie Sommers, avid birder and treasurer of the Audubon Society of Northern Virginia.

“Battalions of photographers and birders have crowded the boardwalk,” reports Larry Meade, president of the Northern Virginia Bird Club.

These are the first sightings of this bird in this park, according to the park’s manager, Karen Sheffield. “The visitor excitement has been high and the parking lot has been full,” she reports.

Bryan Watts elaborates. “Roseate spoonbills are one of those beautiful but unusual species that really attract people. There are few sites in nature that rival a flock of spoonbills flying over a southern swamp or marsh in the half light of dawn,” he says. Watts is the Director of the College William and Mary’s Center for Conservation Biology.

Roseate spoonbills are tall, long-legged, pink waterbirds. Adults have scarlet red wing patches, red eyes and pale green heads. Some admirers liken them to a Dr. Seuss storybook character. The birds have a football-shaped body, can be up to 33 inches tall, weigh 42 to 63 ounces and have a 47-to-50-inch wingspan. Young birds are a paler pink than adults.

The birds scoop up fish, crustaceans and other prey as they slowly step through the water. “Spoonbills specialize on small aquatic creatures. They swing their bills back and forth through the water, allowing the water to pass through and capture food items,” says Greg Butcher, Vice President of the Audubon Society of Northern Virginia.

Roseate spoonbills are typically seen in coastal southeastern U.S. states and South America. North America’s roseate spoonbills breed mostly in Florida and Texas. So why are they in Northern Virginia? “All the long-legged wading birds, like herons, egrets, ibises and spoonbills, disperse after the nesting season,” Butcher says. “Both white ibises and roseate spoonbills are breeding farther north than they used to and so they are dispersing farther north than they used to. I saw an immature white ibis at Huntley Meadows the same day I saw the spoonbill.” Spoonbills have been recently documented in other parts of Virginia and the mid-Atlantic region as well.

“The spoonbills at Huntley Meadows Park mostly appear to be juveniles,” observes Meade.

Watts explains: “After fledging, young birds wander beyond their normal range. These birds may have been aided by the recent storm, but the late summer wandering is consistent with the pattern we see in most waders.”

“The visitation of the spoonbills and the fact that the birds have remained for two weeks speaks volumes for Huntley’s wetland restoration project and our ongoing active management of this wetland,” says Sheffield. “The spoonbills are finding wonderful habitat, including lots to eat. This is a significant mark of wetland management success.”

Butcher adds, “They are good indicators of good water quality that can support these creatures that form the base of the aquatic food chain.”

There are six spoonbill species worldwide. “Roseate spoonbills nest in colonies with egrets, ibises and herons, typically on islands or over standing water,” according to Cornell University’s “All about Birds,” in habitats like mangroves, willows, sea myrtle and other shrubs near the water. Nests can be up to 16 feet above the ground or water.

If there’s a positive side to climate change, maybe it’s more spoonbills. “We can expect more spoonbills,” predicts Butcher. “It is almost certainly connected to global warming. It also helps that we no longer kill long-legged wading birds for their plumage.” He is referring to the late 19th and early 20th century plume hunters, people who slaughtered millions of birds for feathers to decorate women’s hats in the name of fashion. Experts say that spoonbills were common in the southeastern United States until the 1860s but virtually eliminated by plume hunting.

In 2016, the species rated a 10 out of 20 on the “continental concern score,” metrics prepared by the group Partners in Flight. While Partners in Flight considers the bird to be a species of “low conservation concern,” the loss of feeding and nesting habitats does worry many who monitor bird populations and health.

As the “paparazzi” flock to Huntley Meadows to see this rarity, the spoonbills just keep wading and swishing their impressive bills in the water unperturbed, thrilling the throngs.