Fundraiser this Sunday at the Lyceum. 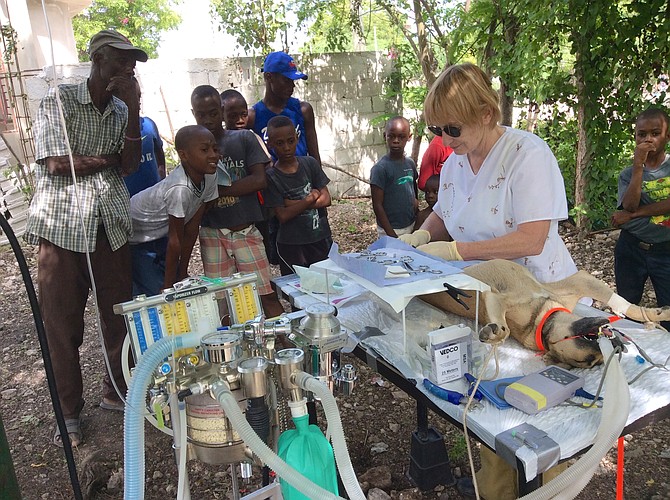 In Haiti: A very poor part of a poor country.

Driving through the community to pick up dogs for vaccinations and surgery.

The first time Alexandria veterinarian Dr. Holly Gill visited Haiti nearly 20 years ago, she vowed to return. Although the local veterinarian was eager to get back to her Northern Virginia practice, she was simultaneously disappointed to leave the small island country, its hard-working people, and – perhaps most of all – the many Haitian animals she found in critical need of medical care.

“We’ve always traveled a lot of places,” said James Lebovic, Gill’s husband and travel companion. “It was really hard for Holly to see animals in dire need, and Haiti was always the place she wanted to locate for volunteer work.”

Two and a half years ago, all the pieces fell into place for Gill to return to Haiti with Holly’s Hands, the non-profit organization she established in 2013 to help animals in developing countries. Through Holly’s Hands, she treats animals abroad that typically live on the streets instead of in the homes of people who love them.

“This really has been my idea all along,” Gill said. “We went to Haiti in 1989, and I immediately liked the Haitian people. It struck me how industrious they were. Coming back to contribute in this way has been my dream. Up until now, these trips have been my personal project, but now we are working to make it all stronger – to improve the lives of the animals here, and also to help people feel that these dogs and cats can really be part of their families.”

Between her first trip to Haiti in 1989, and her return to the country in 2015 as a volunteer veterinarian, Gill has been quite industrious herself. In 1998, she established Hollin Hall Animal Hospital in Alexandria. She has also been to multiple countries where she’s performed a number of life-saving procedures on local dogs and cats.

“I started Holly’s Hands – my charity – in 2013 after going to Ecuador,” Gill said. “I thought, ‘If I’m going to really help these communities, I want to do it as safely as I possibly can.’ So, I formed a 501(c)3 non-profit and invested in anesthetic equipment – the devices that the military actually dropped out of planes in Desert Storm for military doctors to use on wounded service members. I try to use the same standards of care that I employ in my practice at home.”

Holly’s Hands has evolved since its inception five years ago, and today the non-profit is Gill’s vessel to the country that tugged at her heartstrings all those years ago. Both Gill and Dr. Ami Krasner, another Hollin Hall veterinarian, returned recently from their fifth Holly’s Hands trip to Haiti, where they touched many canine, feline – and, in turn, human – lives.

“We vaccinate, deworm, and perform surgeries,” Gill said. “This trip, we vaccinated about 140 dogs and cats and performed about 30 surgeries. We treat disease when we’re over there, too. There were two cases alone in the area of people recently having contacted rabies, so what we are doing is important. I’m usually the only surgeon while Dr. Krasner handles most of the anesthetic procedures and vaccines.”

Despite being a practiced veterinarian, Gill too often finds herself surprised at the living conditions of animals in countries like Ecuador and Haiti.

“We usually only stay about a week, but we always have plenty to do because, the area we go to in Haiti, the Sud region, simply doesn’t have healthcare for animals,” she said. “They don’t even have a veterinary pharmacy. It’s really a novel situation. We see things there that we don’t see in the U.S. There are no vaccinations. What we are trying to do is get people to realize that we have ways to help them take care of their animals, that there are ways to get them domesticated, healthier and safer. As of now, people don’t bring them into their homes because they have diseases.”

While Gill works with other non-profit organizations and a few locals for logistical support, she and her small team are mostly on their own once in country. Up to this point, Gill and Lebovic have funded these trips out of their own pockets. Finally, after years of performing pro bono procedures on animals in underserved countries, Gill is hosting a fundraiser for Holly’s Hands: Howling for Holly’s Hands, a comedy and Improv show on Sunday evening, June 24 at the historic Lyceum in Old Town, to help fund future trips to Haiti.

“While we’ve had very small fundraisers here and there, Holly’s Hands has mostly been self-funded,” Krasner said. “Howling for Holly’s Hands is our first big effort. Dr. Gill works so hard and we want to get the word out so that the community can get excited about Holly’s Hands. We have looked into grants, but, coordinating an event like this has always been in the back of my mind. It was just about finding good timing.”

Krasner is involved in the local Improv scene, so she has lined up a talented group of performers for the show.

A veterinarian of more than eight years, Krasner has not only been instrumental in planning Howling for Holly’s hands. She was also key to bringing Holly’s Hands to Haiti.

“My cousin, Molly, lives in Haiti, working in women’s healthcare in the Sud region.” Krasner said. “I had gone with Dr. Gill to Ecuador. We had talked about wanting to go to Haiti, knowing that there would be a big need there. I’ve enjoyed doing this kind of work also and thought it would be a good experience for us and a good fit for the community. So we were able to connect with my cousin and work with the people in her area to get the word out and help local animals.”

They set up shop in Molly’s driveway on their first visit and, from there, word quickly spread. Now, the locals anticipate Holly’s Hands visits.

In just a handful of visits to Haiti, Gill and Krasner already see the impact that they are making. Still, they are far from being satisfied.

“You can see how much healthier the dogs we spay and neuter are,” Gill said. “We work with animals in different communities in the region. We go to the animals, and to homes when people don’t have cars. We also work with one local man in Haiti who gets the word out so that people know when we come so that they just come and meet us, knowing we’ll take care of them.”

Haiti has been on Gill’s mind for years, and the near-to-her-heart country isn’t going anywhere. So, her small team has high hopes for Howling for Holly’s Hands this weekend. Even with Gill and Krasner’s busy schedules – including their time in Haiti earlier this month – they’ve coordinated a show that promises to have the audience howling with laughter.

“There’s a really great performer coming from New York, an all-female comedy troupe, and so much more,” Krasner said. “We’d love to raise $5,000, because even that would help so much. We want to put more money in the charity and go back to Haiti later this year. I want people to know about this charity and all the work that Dr. Gill and [her husband] Jim put into it. Going to these evolving areas and supporting this mission has been really special to me.”

To make a donation to attend Howling for Holly’s Hands, and to learn more, visit https://www.brownpapertickets.com/event/3405704.