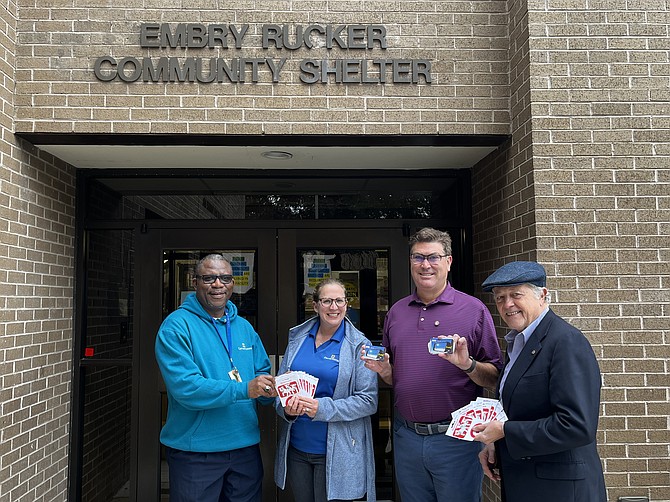 From left, Everett George at Cornerstones and Meridith Hovan, vice president of resource development at Cornerstones, accept $1,000 of Target and Mobile gas gift cards from Michael Broyles, president of the Rotary Club of Great Falls, and Bob Dinkel, Rotary's Cornerstones point person outside of the Embry Rucker Shelter in Reston. Photo by Mercia Hobson.

Rotary had previously provided 75 to 100 clients at the shelter with a boxed restaurant meal each quarter. Volunteering was hardest when locating restaurants that catered with discounted boxed meals. Dinkel named four local restaurants that, knowing the cause Rotary was addressing, stepped up to the plate, literally; Canteen D'Italia in Herndon (Jason), Mookie's BBQ in Great Falls (Brian), Gregorio's Trattoria at North Point in Reston (Christopher), and Brx American Bistro in Great Falls (Ash). Rotary bought the food, served the clients, and helped in the kitchen.

For the third quarter, Rotary asked Cornerstones what they needed most. The Wishlist? Cornerstone said gift cards were appreciated. Dinkel approached the Great Falls Rotary Board, which granted $1,000. Rotary bought $25 Target and gas gift cards to distribute.

"You would think it would be easy to obtain gas cards, but many gas stations don't offer them. You have to go high and low for gas cards," Dinkel said. He found them at a Chantilly Mobile station, 20 in total. "It was as if it were meant to be," Dinkel said.

Broyles recommends gift cards because they let displaced individuals buy food, toiletries, and gas to get back on their feet and then cover other costs. Everyone's needs vary. In comparison to quarterly meals, gift cards fulfill a broader need. Dinkel and Broyles were thrilled with the idea. They gave the gift cards to Meridith Hovan, vice president of resource development at Cornerstones outside of the Embry Rucker Shelter on Oct. 25. She lauded Rotary's quick project turnaround.

Hovan said Cornerstones knew of the many needs in the community before the pandemic but did not realize their depth or breadth. Food insecurity, affordable housing, and family and individual stability remain priorities. Gift cards help shelter residents cope with unexpected crises we all experience, but people who are financially on the edge are hit the hardest.

Rotary announced a surprise on Monday, Nov. 7. It is nearing the next quarter. Rotary Club of Great Falls is also giving Cornerstones $1,000 in gift cards for its "Cards for Kids" holiday campaign, from Amazon, Dick's, Kohl's, and Walmart.

"We plan to stop by and meet with Meredith at Cornerstones at the Sunset Hills Road offices on Wednesday to deliver the cards, as we did at the shelter. I'm glad to see that Rotary is able to support Cornerstones and the local community they serve," Dinkel said.