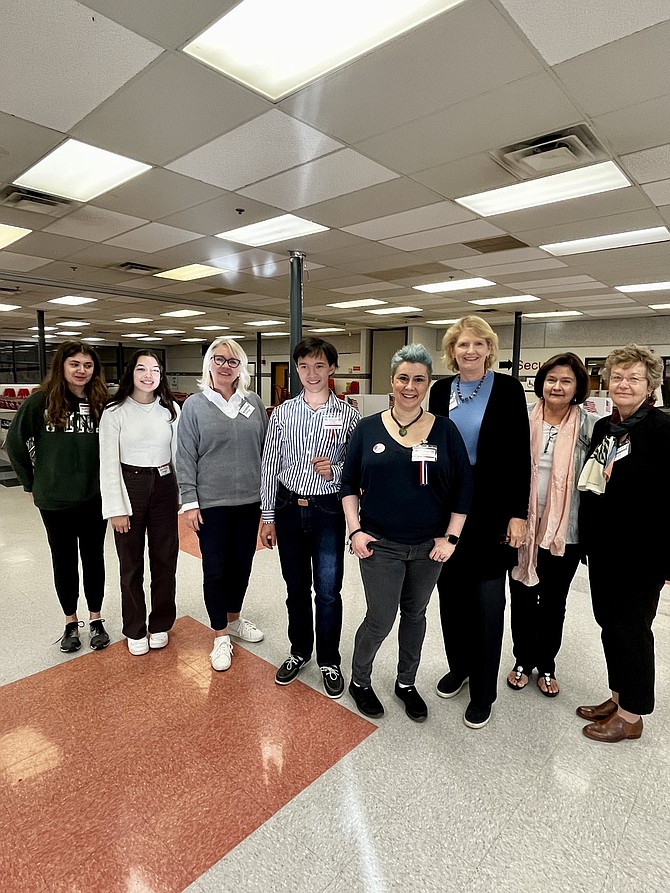 It takes a team of dedicated Fairfax County Election Officers and pages to provide a smooth-running voter experience. Photo by Mercia Hobson.

Voters in McLean were up early to quickly cast their ballots in the 2022 midterm elections. Only one race appeared on the official ballot. At precinct 310 Kirby at McLean High School, the US House of Representatives election for the 11th Congressional District was on the ballot. James (Jim) Myles (R) challenged incumbent Gerald E. (Gerry) Connolly (D).

Virginia did not have any ballot initiatives in 2022 comparable to Maryland's Question 4, "Legalize marijuana in Maryland," or California's Proposition 1, "Provide a state constitutional right to reproductive freedom, defined to include abortion and contraceptives."

Outside the polling location, political signs sprouted, and arrows marked the walking route inside the school to the voting location. Inside, voting appeared light around 8:30 a.m. Only a couple of non-election officials could be seen in the room.

Mason Williams was the Fairfax County chief election officer. He said they planned the polling site's general layout for an orderly flow producing a quick voting experience. A separate entrance and separate exit, single-direction traffic, and a focus on arranging the polling place so voters could mark and cast their ballots privately and quickly mattered.

"Our rover said this is the best set location that he's seen all day," Mason said. "People come in. They go to the next table. They go there. Vote. It's been quite a lot of people, but it just goes quickly."

The Marketos family from McLean, a family of five, arrived a few minutes later. The parents enthusiastically showed their ballots to their children, huddled them close as they voted, and then let them feed the ballots into the machines.

Asked what mattered to them, young Kosta spoke up immediately to explain why they had come, "It is Election Day." And as Peter, the father, put it so plainly: "It is our civic duty."