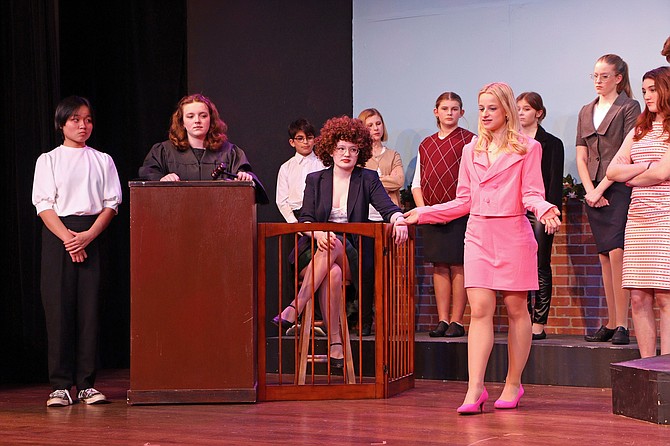 The story of Harvard’s beloved blonde comes to life with an energetic and talented youth cast as “Legally Blonde Jr. the Musical” opens Jan. 13 at Aldersgate Church Community Theater.

Based on the award-winning Broadway musical and the popular movie, “Legally Blonde Jr. the Musical,” follows the transformation of Elle Woods, who has been dumped by her boyfriend for not being “serious” enough. Elle takes matters into her own hands, charming her way into law school, befriending classmate, Emmett, and spunky hairdresser, Paulette.

“One of the most important themes in Legally Blonde is not judging a book by its cover.”

“As our community continues to bounce back from Covid, ACCT wants to bring high energy and visually exciting productions that remind people to have fun and celebrate life,” said director Shelagh Roberts. “Particularly for our youth production that features actors ages 12-18, ‘Legally Blonde, Jr.’ is a great show for a super dynamic and mature cast.”

“Elle Woods is a strong, bubbly, bright sorority girl with a big heart,” said Johnson in preparing for the role. “Many people see her as your typical dumb blonde who cares too much about material things but she is entirely the opposite. She knows who she is, the rest of the world however does not, and only sees her as a pretty face.”

Julia St. Pierre and Maureen Allen are co-producers of the book by Heather Hach with music and lyrics by Laurence O’Keefe and Neil Benjamin.

“One of the great things about ACCT's junior productions is that many of our cast members return each year, so we get to watch them grow up on stage,” said producer Maureen Allen. “Legally Blonde Jr. was an appealing show for the age group of our core group of actors and drew in some talented new additions to our group.”

Legally Blonde the Musical premiered on Broadway in 2007 based on the movie of 2001 that starred Reese Witherspoon and Luke Wilson. The story follows the transformation of Elle Woods as she tackles stereotypes, snobbery and scandal in pursuit of her dreams. In the process she finds that looks and books are not mutually exclusive.

“One of the most important themes in Legally Blonde is not judging a book by its cover, which rings particularly true in this production, because it is performed entirely by student actors,” said cast member Lauren Allen. “I hope the audiences see that even though we may be young, we are talented far beyond our years and can put on a fabulous show.”

Added Campione,“I hope that audiences take away that you should never judge someone based on their outward appearance, but rather on their character and how they treat others.”

Heather Gifford is Music Director with choreography by Michelle Koros.

“Our cast has a really unique and infectious energy and they are really strong working together as an ensemble,” Roberts said. “The choreography is such a perfect accompaniment to the music and plays a huge part in propelling the action and storytelling. The joy and enthusiasm of this cast will absolutely resonate with audiences, I have no doubt.”

Legally Blond Jr. the Musical opens Jan. 13 and runs for two weekends at Wesley Hall of Aldersgate United Methodist Church, 1301 Collingwood Road in Alexandria, with a special matinee performance on Martin Luther King Jr. Day. Evening performances are Jan. 13, 20, and 21 at 7:30 p.m. with matinees at 2 p.m. For tickets or more information visit www.acctonline.org.