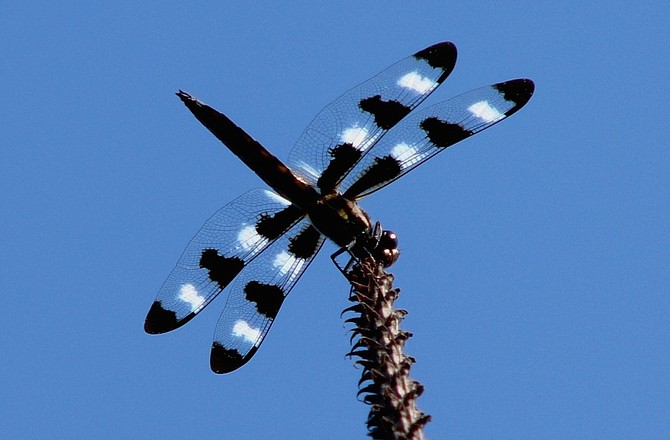 Today I saw the dragonfly

Come from the wells where he did lie

An inner impulse rent the veil

Of his old husk: from head to tail

A living flash of light he flew. 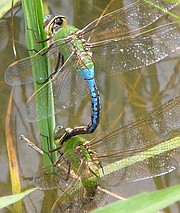 They flit, they zoom, they patrol, they shimmer in the sun. Some even mate in the air. Expert aerialists, dragonflies and damselflies whiz around usually over water, preying and becoming prey. Because they usually move quickly, they can be hard to identify, but not for retired physician, Ed Eder.

On Aug. 19, 2020, Eder spotted the Swift River cruiser dragonfly (Macromia illinoiensis illinoiensis) in Dyke Marsh, the first documented sighting of this species there. A two- to three-inch-winged insect, it has bright green eyes, a yellow stripe on its side and yellow spots along the length of its abdomen. Experts say that Swift River cruisers are probably the fastest dragonflies in North America, able to reach speeds of up to 40 miles per hour. Most dragonflies have a cruising speed of 10 miles per hour.

Since 2016, Friends of Dyke Marsh volunteer surveyors have identified 36 dragonfly and damselfly species in the preserve, including another first record in 2019, the blue-tipped dancer (Argia tibialis). Chris Hobson, a Virginia Department of Conservation and Recreation zoologist, documented 16 species in Dyke Marsh in 2011. He saw 5,000 of one species in one day and 1,000 of another in a two-or-so-hour paddling trip.

Dragonflies and damselflies are typically found on and near rivers, wetlands, streams, ponds and lakes. April to November are the best months to see them in Northern Virginia.

Adults can be from half an inch to five inches long. Dragonflies and damselflies have two pairs of wings, two- to three-inch wingspans and three pairs of legs, among other characteristics. Dragonflies typically spread their wings to their sides and their eyes are not separated. Damselflies are smaller, they usually hold their wings together over their abdomen and their eyes are separated. Many dragonflies and damselflies have bright, lustrous hues and diaphanous wings. Their long, slender bodies have earned them the nickname, “devil’s darning needles.”

Mating is a “contact sport,” says https://dragonflywebsite.com/. Many mate in flight in a circular “wheel position” with the female arching in a circle to connect to the male genitalia. Some mate connected in what’s called “tandem linkage.”

“It’s the wild west out there,” Hobson chuckles, adding, “They are adaptable. The dragon hunter and blue dasher will breed in a truck bed if water is left long enough.” Females typically drop their eggs into the water or on aquatic plants so their larvae, known as nymphs, are aquatic.

They are “voracious predators,” Hobson observes and can eat hundreds of mosquitoes a day. “They’ll eat anything they can catch and chew. Some are cannibalistic. They eat their brethren,” he adds. Dragonflies catch and eat smaller insects with their strong jaws with sharp teeth.

Of North America’s 331 species, nine appear to migrate south in the fall, though biologists caution that much is unknown. Experts believe that some species, like the common green darner, fly south in the fall, lay eggs and then die. Their young fly back north in the spring so it takes two generations for a full round trip.