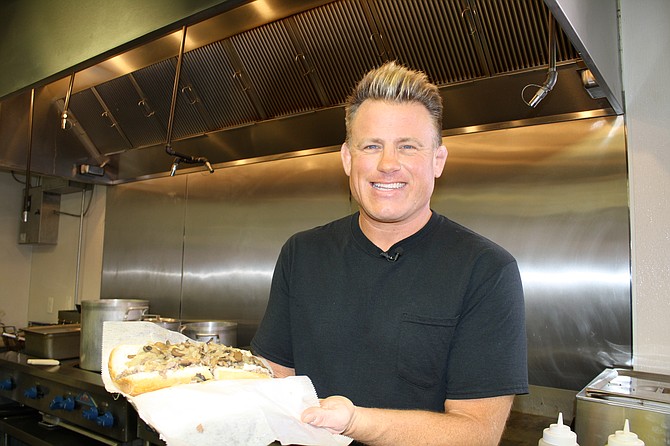 The cheesesteaks at Al’s Steak House in Del Ray were on the top of the storyboard for Brandon Frye, also known as the “Food Dude,” as his video crew jockeyed for position in the tight kitchen along Mount Vernon Avenue. Chef Mark Williams chopped a mound of steak on the fryer, which would later turn into about 50 cheesesteak sandwiches that has made Al’s a go-to spot on Mount Vernon Avenue since 1955.

Frye kept the conversation going as the cameras rolled. “That’s a lot of meat man, how many subs?” he asked. Then Frye segued into the history of the cheesesteak sandwich, and the cameras cut back to the pile of meat being chopped.

That’s life on the set with the Food Dude, a native of Alexandria who travels around with a film crew of Cheryl Anders of Reston and Keri Cannistraro from Burke, capturing the culinary art at its best. Cannistraro has a video company called VideoMagic. They’ve been to a number of places on the east coast, such as the Nordic Lodge in Rhode Island, Bill’s Gyro Souvlaki Atlantic City and others, and been featured on NBC and CBS, producing more than 50 food shows in their climb to the top of the food show heap. The format is similar to Diners, “Drive ins and Dives” but Frye isn’t concerned. “If it works, it works,” he said.

Frye grew up on Route 1 in Alexandria, where his family worked at the Cow Palace, a bar and grill, where Frye’s memories of that were crawling

Behind the cameras, Keri Cannistraro and Cheryl Anders capture the action.

around on the floor when they opened in the morning, looking for change from night before. He went to Woodley Hills Elementary School at that time.

Fast forward several years, and now he’s the focus of his own show that is big on social media, which he hopes is a first step. “I’m pretty knowledgeable about food, I’m not into fancy food too,” mentioning the term “hoity toity,” with a scowl. He has his sights on the food network and more.

Back at the grill, Frye talks with Williams about the process for a cheesesteak, but when it comes to the secret ingredients in the marinade, Williams didn’t budge. Frye played it up for the sake of suspense. “Can’t get it out of him, man,” he said to the cameras.

It was getting close to lunchtime and the regulars started coming in, so Dorothy Breeding, one of the owners, kept answering the phone and dealing with the walk-up orders at the counter, like “Curly,” from the neighborhood. He was ordering a late breakfast. “They’ve got great everything, don’t leave the pizza out,” Curly said.

Frye approached Breeding about the idea a few weeks ago after he heard about the cheesesteaks, and she was skeptical at first until she looked at his clips. “He’s done some pretty reputable restaurants, we figured we’d give it a try,” Breeding said.

Al’s Steak House opened in 1955, and changed hands a couple of times before the Breedings took over. There was a fire on July 6,

2016 that put it out of commission for a short time while they rebuilt and redesigned the kitchen.

Anders and Cannistrare will take the footage back to their studio, edit it and release it initially on the FoodDudeUSA Facebook page. From there, people will see it and share it via the internet, and it grows from there in social media fashion. Frye noted to the folks at Al’s that they’ll see an increase in sales after the show hits the web. Then it’s on to the next restaurant for Frye and the crew.