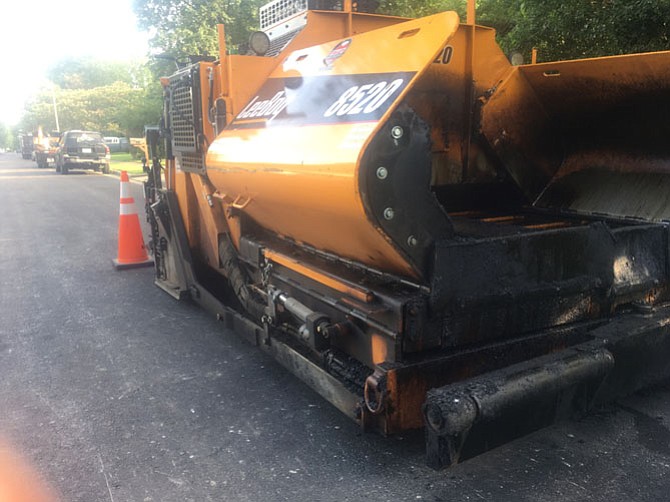 Mount Vernon — A paving operation on Frye Road, and requests by one of the residents to the Mount Vernon District Supervisor Dan Storck, has turned into a controversy

Todd Usher, a resident of the community since 2014, does not like the speed bumps that were put on Frye Road and is looking at the upcoming paving operation as an opportunity to get rid of all of them, or at the very least, the one that is closest to his house. He says he’s tried to discuss this with Storck but Storck will not meet with him to discuss this issue, Usher said, and has tried numerous times.

Storck is aware of Usher’s issue, and refers to Usher as a “frequent flyer,” at his office — over the past few years, Usher has been in for a few different reasons and knows Storck’s late night availability on Thursday nights during the week, but has not taken advantage of it. They’ve both been exchanging emails, but neither has picked up the phone.

“I’m curious why he won’t sit down with me,” said Usher.

“He knows how to schedule an appointment with me,” said Storck, “we’ve given him the opportunity.”

Gary Scutt, a neighbor of Usher’s, called the speed bump issue “one of our favorite topics,” but had the same feeling about Storck’s office though. “He’s as responsive as a fence post,” Scutt said.

It started with the speed bump process and traffic calming in Usher’s neighborhood off Frye Road in the Mount Vernon District back when the previous supervisor, Gerald Hyland, was in office. There was a petition started by someone on the street with alleged ties to Hyland’s office, and it led to the county putting in the speed bumps and humps in the neighborhood.

“It’s a very specific process,” said Storck. It not only leads to speed bumps, but an “a la carte menu of things,” to calm traffic, Storck said. The individual with ties to Hyland’s office, before Storck became supervisor, which Scutt or Usher declined to name, didn’t want cars speeding past her house so she pushed for the speed bumps. Scutt said he was at the meeting where she admitted it. It was done “mainly to appease someone that had the ear of the county supervisor,” he said.

The signatures were obtained and the speed bumps put in, but not all were in favor. There are a few residents that are not for them, and Storck is aware, but it’s all in the numbers. “Over two-thirds that returned the survey said they wanted them,” Storck said. To Usher, the signatures were from another part of Frye Road, and not down near the end where he lives. “They didn’t get anybody’s input down here,” he said.

When the paving started this summer on the side roads, Usher looked at it as the perfect time to get rid of the speed bumps. To repave the street, the speed bumps have to be taken out, which Storck’s office has acknowledged, and put back in at $100,000 a piece, says Usher.

Usher needs at least 50 people to sign a petition for a new survey but he said there is not enough time to get that petition going. Storck wasn’t sure about the costs Usher mentioned but will support the spending since it supported the effort the majority of the community wanted.

“I don’t want the county to come out there if there’s not a substantial number of people for it,” said Storck. “He’s being offered the chance for a new survey if he gets 50 households,” Storck added.

And so far, the paving schedule has remained as is, so Usher is looking for a little victory in the whole thing, but nothing has changed thus far. “If we could get rid of this northernmost one, we’d be happy,” Usher said, pointing to the bump out in front of his house.

The back and forth discussions have old roots in the government process. “That’s what democracy is all about,” said Storck.

Scutt is a lifelong resident of the Mount Vernon District and “stuff like this drives me crazy,” he said.