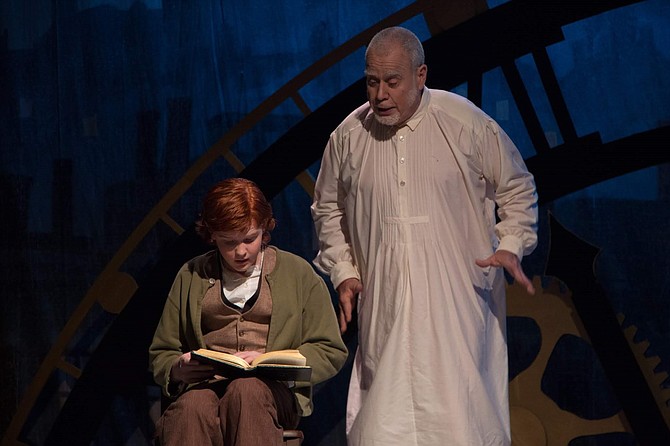 In the past, Scrooge (Brian Lyons-Burke) sees the younger version of himself (Alex Eskew) in LTA’s production of “A Christmas Carol,” which runs through Dec. 16. Photo contributed

The Little Theatre of Alexandria is ringing in the holiday season with Charles Dickens’ classic, “A Christmas Carol,” from now through Dec. 16. The show stars Ebenezer Scrooge, a miserable, bitter old miser who travels with ghostly guides through Christmas past, present, and future to find the true meaning of the holidays. The show, based on the novella first published in 1843, is produced by Brooke Angel and is complete with special effects, Victorian carols, and Tiny Tim.

Director Shelagh Roberts said she was looking for a new challenge, and she certainly got it. “Along with so many others, the story has always had a special place in my heart. Dickens’ genius provides a perfectly balanced story with its contrast of the harsh conditions of Victorian London with the joy and goodness of Christmas. Because everyone knows the plot and characters, it’s one of those shows that brings the audience’s expectations into the theatre with it,” she said. “The show has everything: realism, romance, fantasy, and characters that are bigger than life. And the production is a lot of fun with the colorful costumes and lighting, beautiful Christmas carols, and special effects.”

She added: “We want to keep faithful to the narrative and spirit of Dickens’ novella. This adaptation by Donna Farragut was first produced at LTA in 2006. Through the years, everyone puts a different spin on the tale and it’s always a lot of fun. We wanted to produce it as close as possible to Dickens’ original words and intentions while keeping it at a family-friendly length, since there is no intermission. The Victorian carols interspersed throughout the production have always been one of my favorite parts, and Linda Wells’ beautiful piano work and underscoring really adds texture to the production.”

Brian Lyons-Burke is playing the role of Ebenezer Scrooge, a miserly, bitter man who has shut himself off from all close human contact in his pursuit of wealth. “In particular, he scorns Christmas and the ‘idiots’ who celebrate it. Through the course of ‘A Christmas Carol,’ he is reminded of his past, made to see the reality of his present, and shown the bleak nature of the future if he does not change his ways,” he said.

“He experiences an incredible range of emotions as he is transformed from a bitter misanthrope to a joyful benefactor of his fellow man. It is extremely challenging to honestly portray not only each of these emotions, but to manage the transitions as he is forced to recognize his place in the world, the effect of his choices, the price those choices demanded from him, and his chance to live a better life,” he said. “Scrooge is an iconic, well-known character; the audience will already have expectations of what they will see. My goal is to give them something real, something new, while not disappointing those expectations. And it is a definite challenge living up to the level of talent of the veritable army of artists that all work together to create this production.”

Colin Davies is playing the dual roles of Charles Dickens and the Ghost of Christmas Present. “People imagine Dickens to have been a kind and thoughtful man who loved children, but there was a very negative side to him as well. He probably had affairs with both his wife's sisters and also with the actor Ellen Ternan. He abandoned his wife after 20 years, blaming her for having so many children. He was certainly charming, but also vain, and by all accounts was very strict with his children,” he said. “The other character I play — the Ghost of Christmas Present — is a very jolly and likable fellow, often portrayed as a kind of Father Christmas.”

He said he’s one of two British-born actors in the show and also the British accent coach. “There are some major pronunciation differences between the two accents: UK English uses the long 'a' in words like 'past' and 'afternoon'. There's also the different way of pronouncing words like 'new': Americans pronounce it 'noo', Brits add a 'y' sound to make it 'nyoo'. And Americans pronounce the 'r' in words like 'paper', whereas Brits say 'pay-pa'. So, we've been all been working on our accents,” he said.

Larry Grey is playing the dual roles of Jacob Marley/Mr. Fezziwig. “Dickens begins his story with, ‘To begin with Marley was dead’ .... ‘This must be distinctly understood or nothing can come of the story I am about to relate.’ The only true ghost; the rest are spirits — they represent Scrooge’s past, present, and future; Marley sets things in motion for Scrooge’s redemption. He represents what lies in store for Scrooge if he does not change his heart. His is an eternity of trying to make amends for a life spent in selfish misery and is tortured by the fact that he cannot do so. He is repentant and yet willing to go to great lengths to give his surviving partner ‘a chance and a hope’ before it is too late. He represents death’s eternal judgement on the unrepentant heart,” he said.

He added: “In contrast is the other character I play — Old Fezziwig — Scrooge’s mentor from his distant past. A jovial man with an open, generous heart who truly lived the spirit of Christmas all year round. He understood the joy in giving and he embraced all the happiness and love life has to offer; money was secondary to him. ‘With but a few pounds he had the power to make us happy or miserable;’ he chose to use his wealth to make people happier and lives better. He represents what Scrooge had closed his heart to in pursuit of wealth and having been hurt by life.”

Christine Tankersley plays the role of Mrs. Cratchit, the wife of Bob Cratchit and the mother of six children. “She's kind, loving, and wants the best for her family, but not afraid to tell Bob what she really thinks,” she said.

She said the challenge for her was memorizing the lines. “But beyond memorization, imagining the loss of a child has been difficult — to be incredibly sad and heartbroken, but know that you must have a positive attitude for the rest of your family who is also suffering,” she said.

The Little Theatre of Alexandria is presenting “A Christmas Carol” from now through Dec. 16. Tickets are $20. Show times are Wednesdays through Fridays at 8 p.m.; Saturdays at 3 p.m. and 6 p.m.; and Sundays at 3 p.m. The venue is located at 600 Wolfe St., Alexandria. Call the box office at 703-683-0496 or visit www.thelittletheatre.com.