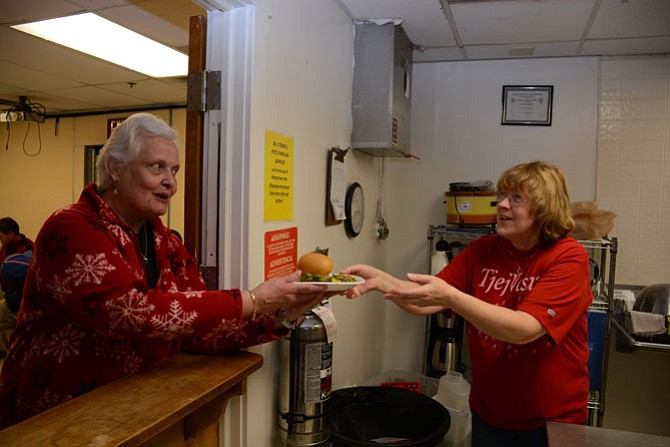 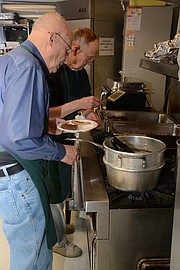 At 7 p.m. doors to Rising Hope Mission Church open for guests to sign in. Promptly at 7:10, volunteers begin serving dinner. On a chilly, rainy, mid-December night, the volunteers from Aldersgate United Methodist Church prepare beef steak with gravy, beans and corn for about 20 homeless individuals.

By 9:30, staff from New Hope Housing, the non-profit organization contracted by Fairfax County to run this hypothermia prevention shelter, hand the reins over to the volunteers from Aldersgate to chaperone overnight. Different churches take one night each week for two-month periods.

Karen Latta of Mount Vernon has been working at the shelter since it began at Rising Hope, about 10 years ago, through a collaboration with the ecumenical group Ventures in Community.

“We were talking about how someone had died from hypothermia,” said Latta. “We pulled it together quickly after that happened, there really wasn't any doubt.”

“There were a lot of people living in a camp in the woods in the area,” said Pam Michell, executive director of New Hope Housing. “We got together with Ventures in Community, brainstormed, and said, ‘We can do something.’ Keary Kincannon, the pastor here at Rising Hope, said, ‘You can use our church.’ Ten years later, here we are.”

Rising Hope has been in the building at 8220 Russell Road in Alexandria for 20 years — its seventh location, counting Kincannon’s own car.

“The reason it's perfect for us to partner with New Hope Housing and Ventures in Community,” said Kincannon, “is because more than two-thirds of our members have been homeless. That's who we started to reach out to, the most in needy in our community, which includes the homeless.”

This particular shelter can handle up to 24 guests per night for the full four months the hypothermia prevention program is running. It began Dec. 1, 2014. According to Michell, the guests are mostly the same single, male adults, with only one or two women each night.

Sherry Edelkamp of Alexandria, a volunteer for the last 10 years, said she’s seen more youth coming to the shelter recently.

“Some of it is they've decided they're grown, and going to do what they want to do,” said Edelkamp. “Some of them just haven't had a great home environment to begin with and this is better than the things that are going on with them.”

Edelkamp described one young man who stayed at the shelter for a week at the beginning of December. When she asked him what was going on, if he just didn’t want to follow his parents’ rules anymore and they put him out of the house, he said yes, almost in tears.

Crain Thomson of Hybla Valley has been helping as a part of the Rising Hope ministry for over three years.

“It’s more the young ones that bother me, because they're on the path to be homeless for a long time,” said Latta.

“Our first and foremost goal is hospitality and safety,” said Michell. “Then, if we can hook people up, so much the better, then sometimes we can even move people into housing.”

With the help of about 400 volunteers, New Hope Housing served a total of 124 unduplicated guests in the last year.

Though New Hope Housing staff and volunteers help with the managing of the shelter, a nurse, mental health professionals and other outreach personnel from Fairfax County make regular visits to help guests like “Denny” work through their issues.

Denny has been homeless for the last eight years. After previously living in Triangle, Va., he went through a stretch where his car broke down, he subsequently lost his job, was left suddenly by his wife and became separated from his daughter. He ended up at the Eleanor U Kennedy Shelter in Fort Belvoir and has been spending time there, Rising Hope and hotels, trying to live solely off Social Security checks.

“We really become a healing community for them,” said Kincannon, “where they can know that they're known and loved and cared about. Yeah they've got some struggles, but other people around them know what they've been though.”

“The best part about Rising Hope is the love to mankind,” said Crain Thomson of Hybla Valley. Thomson has been helping out as part of the Rising Hope ministry for over three years. “To show people somebody cares makes a big difference.”