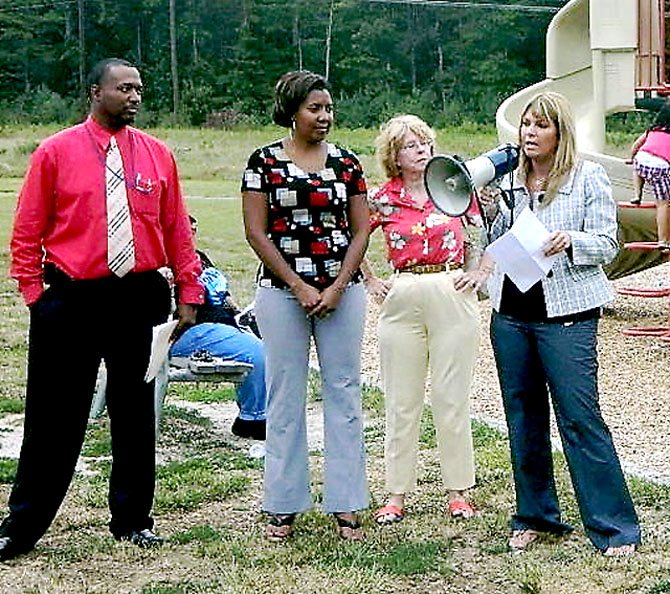 Mount Vernon Supervisor Gerry Hyland was also expected to tour the fields but had to be out-of-town. A follow-up tour is being arranged for him in September. 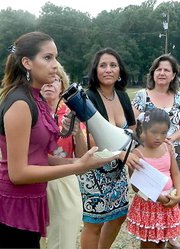 Carla Claure tells of violence, drugs and sexual assault in the Audubon neighborhood and appeals for youth activities.

The tour was arranged by members of VOICE (Virginians Organized for Interfaith Community Engagement) and featured the testimony of youth, parents and coaches.

First visiting the field at Muddy Hole Farm, McKay and Batten heard the testimony of Crystal Compton, a booster, neighbor and parent who is co-owner of a non-profit that supports the Fairfax County Colts All Star Football Team.

“This area of Route 1 that resides in Lee District is a high-youth, high-need area,” she said.

Yet, as coach Ricky Hairston pointed out, the Muddy Hole Farm practice field is unsafe and needs significant improvement.

“We had several players injured due to holes in the field and several players acquired poison ivy while on the field,” he said. “The lack of bleachers, field lines, and goal posts hampered our ability to teach the game properly.” The field also has a pronounced slope and needs grading. Additionally, building a pavilion would provide safety in thunderstorms and there should be lights.

Todd Johnson, division director for park operations, said goal posts would be provided, holes filled and bleachers built. He said he would look into lining the field. However, grading the field was too expensive although it may be provided for in the upcoming $75 million Park Authority bond referendum.

Next touring the rocky field at Mount Vernon Woods which could serve the high concentrations of youth at Audubon, McKay said he’d see to it that the field became a playable soccer field. “It may take us a while but we’ll get it done.”

Also at Mount Vernon Woods, the group heard from teenager Carla Claure who grew up in Audubon. “Audubon started out as a nice community but the neighborhood changed with violence, drugs, fewer activity for youth and sexual assaults. 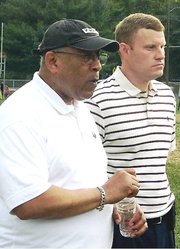 Batten, Park Authority board member, urged the group to keep up the pressure on the school board to provide artificial turf fields at both Mount Vernon High School and West Potomac.

“We’re on your side,” he told the group. “We do need for you to continue providing incentives and do vote for the Park Authority bond.”

Audubon resident Linda De Leon presented McKay and Batten with ceremonial keys she had made. “Each of you is the key to make things happen in the Lee District,” she said.